Convection ovens cook food faster because as opposed to heat surrounding the food, the fan blows hot air onto the food

Ovens are among the essential equipment for any commercial kitchen. Selecting the ideal oven may however be a daunting process due to the many brands of ovens in the market. One is therefore likely to get confused on selection.

Nonetheless, one brand stands out when it comes to choice of ovens. The brand is Turbofan ovens. The brand has gained reputation in the manufacture of ovens for a number of reasons. One, the turbofan ovens are designed with the convection series technology. The convection series means that the ovens are designed with the technology of a convection oven. Convection ovens have a wide range of advantages over the regular ovens. Regular ovens are criticized for having hot and cold spots. Food in such an oven is therefore likely to cook unevenly. 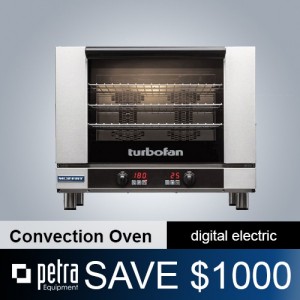 Rack positioning is an essential concept in setting the oven ready for baking or roasting. The right rack placement determines the result of baking or roasting. Some recipes actually recommends that one positions the rack in a specific position such as in the middle of the oven or bake in the bottom- third of the oven. For instance, as a rule, it is hotter at the top of the oven and therefore this position is not ideal for foods you want to brown well such as pizza. However, with a convection oven, one need not worry about the rack position because heat will reach all spots in the oven evenly.

Further, convection ovens cook food faster because as opposed to heat surrounding the food, the fan blows hot air onto the food. This strips away the blanket of cool air that normally surrounds food in the oven. For most foods, the cooking time is reduced by 25%. As the food cooks faster, so are chances of shrinkage eliminated. The food is therefore less likely to shrink therefore becoming less.

In addition, since convection ovens have no any heating element directly heating the oven above or below, the food in the oven is not likely to burn or overcook. Overcooking and food burning is a common occurrence in regular ovens especially for foods placed in the top and bottom racks. With the Turbofan oven, one may cook multiple pans of cookies and achieve even browning without the need to keep switching pans.

The Digital Electric Convection Oven Turbofan E28D4 further offers the option to turn the fan on or off therefore one is able to select the best baking environment.

In addition, the Turbofan ovens have a tray spacing making it easy for one to place trays of different foods without the risk of transferring flavors of one food to the other. Such a model with this feature is the Touch Screen Electric Convection Oven E23T3 that has a tray spacing of 85mm. Another benefit of using turbofan is due to their ease of use. For instance, The Turbofan Touch Screen Electric Convection Oven Turbofan comes with touch screen control and USB port for program. Further, the ovens have an option of manual or program modes.

Further, the ovens are designed with adjustable legs. This is beneficial in the sense that one can adjust the size of the oven to match the height of one’s leveling and benchtop. Several models of the Turbofan ovens have this feature. This includes, the Full Size Touch Screen Electric Convention Oven – Turbofan E28T4 and Full Size Electric Convention Oven Touch Screen Control Turbofan E27T3.

In addition, the buyer has the option to add stainless steel stand thus making the oven easy to clean. These models include the Digital Electric Convection Oven Turbofan E28D4 and Digital Electric Convection Oven Turbofan. If you looking at a cafe fitouts in Sydney or Newcastle, we highly recommend you to include a Turbofan oven in your equipment list.

Find out more about our recent articles, ideas and projects on our blog. Petra Group is a sister company of Petra Equipment, Australian leader in catering equipment supply.